Roots of the Temple Endowment in 1829 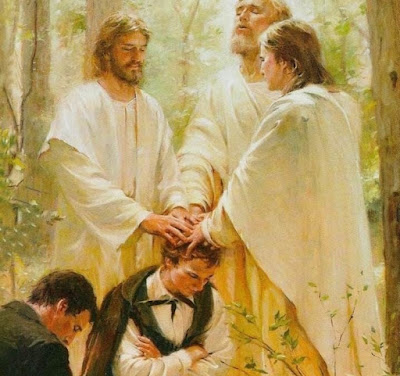 This is a quick and bumpy ride, so if you feel like things aren't quite fitting together, hold on tight and keep reading. The most important point here is the evolution of the ideas about keys, and how early links between Peter, James, and John and keys eventually materialized in the Nauvoo endowment.

In investigating the evolving narrative of the priesthood the restoration I learned that though the names of John the Baptist, and Peter, James, and John in relation to priesthood restoration didn't appear in print until 1835, there were some interesting precursors. One of the significant ones is the 1832 history which talks about the reception of the "holy priesthood" by the ministering of angels, and the reception of the "high priesthood' (no specific angels mentioned) and conferral of the "keys of the kingdom." The 1835 texts specifically link the conferral of the keys of the kingdom with Peter, James, and John, and an 1829 revelation linked Peter, James, and John with the "keys of this ministry," which was ministering unto those who would be heirs of salvation.

Later in Nauvoo JS describes giving keys to the sisters of the Relief Society. The relevant portion of JS' comments from April 1842 read, "the keys of the kingdom are about to be given to them, that they may be able to detect everything false--as well as to the elders." JS made similar comments a month later. The History of the Church reads, "I preached in the grove on the keys of the Kingdom, Charity &c The keys are certain signs and words by which false spirits and personages may be detected from true, which cannot be revealed to the Elders till the Temple is completed."

For those who know, JS is clearly referencing the Nauvoo endowment, which would be given to a number of saints before JS' death. A more exciting insight, going back to the background I laid out above, is that JS correlates "the keys of the kingdom," a phrase used in both comments, and the ability to "detect false spirits and personages from true" or the ability to "detect everything false." This creates a phrasal link all the way back to 1832 and 1835's "keys of the kingdom," associated with the reception of the high priesthood (1832 and 1835) and a visit from Peter, James, and John (1835 only). This also creates a link between the personages of Peter, James and John and their "keys of this ministry" (1829) or "keys of the kingdom" (1835) and Joseph's Nauvoo endowment. I don't know that JS concieved of these keys in the same way across these time periods (I'm actually kind of certain he didn't, considering the "keys of the kingdom" were first associated with the apostleship, so it seems like the keys get repurposed in Nauvoo), but it's pretty cool to see some roots for the endowment stretching back to 1835, 32, and 29.
Posted by Benjamin Seeker at 11:24 PM