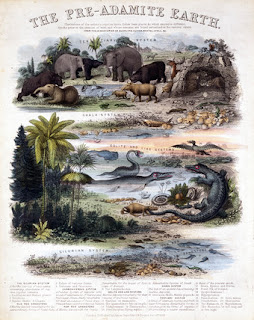 JS' journal, on April 28, 1844, Hyrum Smith preached a sermon I wish I could have heard. Here are JS' notes on the sermon in full:
According to


"My brother Hyrum Smith preached at the stand in the morning, and among other things said the time will shortly come, that when one man makes another an offender for a word, he shall be cut off from the church of Jesus Christ. There were prophets before Adam, and Joseph has the spirit and power of all the Prophets" (emphasis mine).

Frankly, I'm not sure what Hyrum may have been referring to. The closest related aspect of early Mormonism that I can think of is Peter, James, and John's physical interactions with Adam in the Endowment, which suggest they are physical beings, at least according to JS' teachings on discerning spirits and angels (see D&C 129), which he taught both before and after the Nauvoo endowment was administered.

In fact JS, speaking at the organization of the Relief Society in April of 1842, said "that the keys of the kingdom are about to be given to them, that they may be able to detect every thing false," and he repeated this sentiment in May. "I preached in the grove on the keys of the Kingdom, Charity &c The keys are certain signs and words by which false spirits and personages may be detected from true, which cannot be revealed to the Elders till the Temple is completed." When thinking of "certain signs and words" as tools to tell "false spirits and personages" from "true," and when comparing the endowment to D&C 129, which, as I stated earlier, was taught multiple times both before and after the endowment was administered, it should be concluded that JS likely perceived Peter, James, and John as physical beings during their interactions with Adam.

Hyrum's statement about prophets before Adam also could be seen as loosely related to JS' teaching in 1843. According to George Laub, JS taught, "Now the history of Josephus in Speaking of angels came down and took themselves wives of the daughters of men, See Geneses 6 Chapter 1-2, verses. These ware resurrected Bodies, Violated the Celestial laws." Maybe Hyrum's pre-Adam prophets were these "resurrected bodies."

Perhaps JS' alleged belief in reincarnation or Heber C. Kimball's multiple mortal probations could provide more context. What is for sure is that the environment in which things like Kimball's multiple mortal probations and Young's Adam-God theory could flourish existed in Nauvoo, and Hyrum's sermon is one more piece of evidence for it.
Posted by Benjamin Seeker at 10:11 PM